Hero XPulse 200T: What Made Me To Buy

by Suresh Kumar
in Automobiles
Reading Time: 7min read
A A 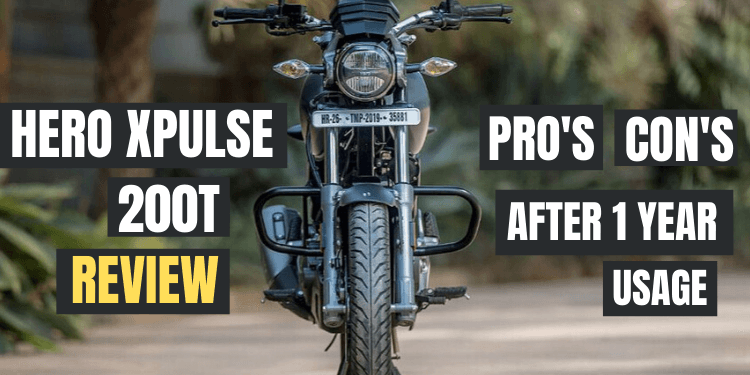 What Made Me To Buy Xpulse 200T Against Unicorn

Before seeing this bike, all I wanted is to have a daily commuter, a good mileage packed up with some good looks, a descent price tag. Basically, like any other Indian, I’m just having the thought of opting in for a 150 cc or 160 cc model. So I gathered every person’s opinion. Everybody pointed me to go for the Honda’s Unicorn, the bike that managed to grab every Indian’s approval. From experienced to novice, everyone just got stuck with the same opinion. I just felt like everyone in my locality and even the people on the Internet is so much satisfied with it. I just grabbed my wallet, wanted to go with the same as well. The moment that I saw it, I just felt like this is just not my type. I’m actually saying it after going for a ride. I even tried to consolidate me a 1000 times by saying that it has got everyone’s approval, but I really didn’t got that wow factor in it. Since I’m young, I think Unicorn’s classy looks just failed in front of my heart. Then comes the Honda’s X-Blade and Hornet.

X-Blade & Hornet – The Almost Got Me Things

Honda’s Hornet, the new X-Blade is stunning and they almost got me on my nerve. Both of them have the same features, almost equal price tag and they even managed to check that’s necessary to me. Although, they got everything checked, some features such as Engine Killswitch, Gear Switching On Display, ABS&nbsp (Hornet) were missing. I don’t know why Honda has totally killed the Kill Switch feature in these two models. It’s not a major flaw, but It’s really disappointing in some way. Design wise, they look stunning especially Hornet, that beast muscle look on front really got me. X-Blade somehow managed to get in between with it’s ABS, but seriously, Hornet is a stunning performer. I drove both of them, while at high speeds, It has a balanced feel, the X-Blade went a little bit shaky and that made me to choose Hornet. Three out of six bikes on my list were gone and another three left.

Yamaha’s FZ line-up was always a favorite of mine. I’m actually a die hard fan of Yamaha FZ (1st version). The FZ is the model that I think is the one that revived Yamaha’s fortunes in India, and since its launch it has been the gold standard for the 150cc models. FZ’s new version 3.0 is also a good looking bike but its mudguard/fender is useless as it’s positioned too horizontally and due to this mud spills over the bottom side edges of the passenger seat. I observed this, thanks to the rain that fell during the test drive.

Then comes the TVS Apache 4v, I did like the way TVS designed this bike. However, it doesn’t feel as confident under hard braking as the one that I saw in my friends Bajaj Pulsar NS 160 or the Honda Hornet. Apache RTR 160 4V misses out on ABS which is a major disappointment. Even the handling at higher speeds was also poor.

After trying TVS, Honda and Yamaha, I ran out of options. I also got Suzuki,  KTM running around somewhere in my mind, most of the bikes from these manufacturers are totally out of my league. I used Suzuki Gixxer already, wanted to go for something new. Hero Motocorp was totally out of my mind as it was unable to deliver a great 150 CC model in its bag, then I saw the Xtreme 200, the new version of it’s Xtreme Series line-up and felt really disappointed with it. I’m actually a big fan of the CBZ Xtreme 2011, the new design looks a bit tacky in my opinion. I thought, I can strike off Hero Motocorp’s name from my list. But, since the dealership was present right in front of  Yamaha, I just wanted to give it a try. I stepped into the showroom unwillingly and saw the XPulse right in front of me.

While the design looks nothing new, XPulse 200T got me with it’s features. In fact, it has some features that many other models in this price segment. Those features include.

I’m on the verge of taking the decision to go for Hornet after seeing these features, I reconsidered my decision again. Even the price tag was quite intimidating as Hero placed it right above the Hornet and below the FZ 3.0.

Suspension is a huge plus point. It can withstand almost every bump on the road no matter how bad they are. The 37nm Telescopic suspension at front and the seven step adjustable suspension on the back really doing the job perfectly.

This bike has got some tech inside and it’s really useful. I traveled to a beach near my locality by using the Bluetooth navigation feature in it and I reached the destination without any Hiccups. In fact, I’m a little skeptical on its reliability. Hence, I opted to go for a route that I already have an idea. I wanted to test the feature and It passed with flying colors. A part from leaving the shortcuts that a person would know from his experience, this app will take you through a route that’s known and reliable to all.

As it is a Tourer itself, this bike is build to withstand for a long and comfort rides. The bike’s comfort is awesome, thanks to its seating design, you will never knew any tiredness in the long run. In fact the seats along with the suspension and the MRF Zapper tires are like the three Musketeers of this bike.

With a price tag of around 1.10 lakhs (I Bought it at that price), this bike is the most affordable with some great features. In fact, it has got the features that went missing in the other bikes of my bucket list. Kill Switch, Bluetooth Navigation, Single Channel ABS. It has got all.

Now comes the cons of this bike. I’ve been riding this bike since 3 weeks and these are the things that I don’t like in this bike.

The Feeling of Something’s Missing in Aesthetic Appeal

While the bike aesthetic appeal is good and classic looking, you’ll get a feeling of somethings missing in it, especially on the front. I don’t know what it is exactly, but there is some thing that’s seriously lack in this bike. Hero Motocorp should consider redesigning the front. Even saw some people comparing this bike’s front end with Navi and TVS XL. I don’t understand where these opinions are coming from, but there is something that seriously lack in it.

XPulse 200T is available with the engine we see with Hero Xtreme 200R. Powering Xtreme 200R is a single-cylinder, air cooled, 2-valve, 4-stroke 199.6 cc engine. This motor makes 18.3 hp and 17.1 Nm of torque and comes with a 5-speed constant mesh gearbox.Whilst the 160cc and 150 cc already captured the Indian’s heart, 200 cc is yet to make its mark in mileage loving Indian’s heart. It is also set to run at over 45+ Kms mileage, which is a plus point for this bike.

I’m a person who recommends a product only after I thoroughly use it. I’m going to do a full in-depth review on this bike after 1-2 month severe usage, stay tuned. Follow us on social media for all the updates without missing.